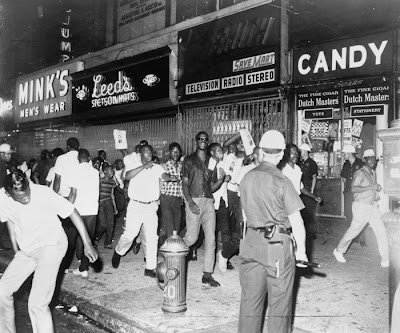 Joan Harris’ husband Greg returned from military service. While having a conversation with Joan’s mother about “the riots,” Greg remarked, “Plenty of Negroes in Saigon—and they’re plenty brave.” Yep, the program continues to display reverence to Blacks.

Peggy Olson caught Dawn sleeping in Don’s office, and learned the secretary was avoiding the riots. Peggy invited Dawn to stay at her apartment, where the two bonded. Peggy tried to connect by saying she was once “the only one” at the agency too—meaning the sole female copywriter. Gee, that’s really relatable. However, Peggy hesitated when leaving her purse with Dawn in the living room. Nice.
Posted by HighJive at 12:03 AM