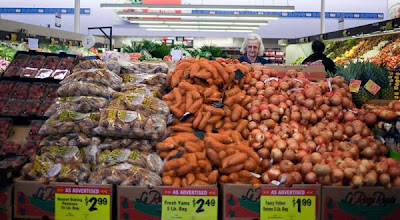 Studies Question the Pairing of Food Deserts and Obesity

It has become an article of faith among some policy makers and advocates, including Michelle Obama, that poor urban neighborhoods are food deserts, bereft of fresh fruits and vegetables.

But two new studies have found something unexpected. Such neighborhoods not only have more fast food restaurants and convenience stores than more affluent ones, but more grocery stores, supermarkets and full-service restaurants, too. And there is no relationship between the type of food being sold in a neighborhood and obesity among its children and adolescents.

Within a couple of miles of almost any urban neighborhood, “you can get basically any type of food,” said Roland Sturm of the RAND Corporation, lead author of one of the studies. “Maybe we should call it a food swamp rather than a desert,” he said.

Some experts say these new findings raise questions about the effectiveness of efforts to combat the obesity epidemic simply by improving access to healthy foods. Despite campaigns to get Americans to exercise more and eat healthier foods, obesity rates have not budged over the past decade, according to recently released federal data.

“It is always easy to advocate for more grocery stores,” said Kelly D. Brownell, director of Yale University’s Rudd Center for Food Policy and Obesity, who was not involved in the studies. “But if you are looking for what you hope will change obesity, healthy food access is probably just wishful thinking.”

Advocates have long called for more supermarkets in poor neighborhoods and questioned the quality of the food that is available. And Mrs. Obama has made elimination of food deserts an element of her broader campaign against childhood obesity, Let’s Move, winning praise from Democrats and even some Republicans, and denunciations from conservative commentators and bloggers who have cited it as yet another example of the nanny state.

Speaking in October on the South Side of Chicago, she said that in too many neighborhoods “if people want to buy a head of lettuce or salad or some fruit for their kid’s lunch, they have to take two or three buses, maybe pay for a taxicab, in order to do it.”

Her office referred questions about the food deserts issue to the Department of Agriculture. A spokesman there, Justin DeJong, said by e-mail that fighting obesity requires “a comprehensive response.” The federal effort, he added, includes not just improving access to healthy foods but also improving food in schools, increasing physical education time, and educating people on the importance of healthy diets.

Some researchers and advocates say that further investigation is still needed on whether grocery stores and chain supermarkets in poor neighborhoods are selling produce that is too costly and of poor quality. “Not all grocery stores are equal,” said John Weidman, deputy executive director of the Food Trust, an advocacy group in Philadelphia.

Read the full story here.
Posted by HighJive at 10:22 PM