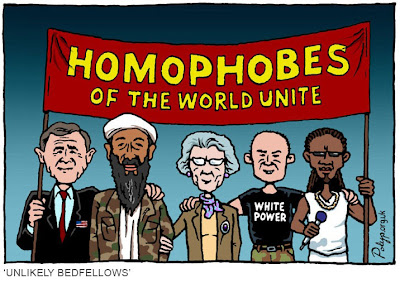 Study examines the roots of homophobia

Acceptance of gays and lesbians has never been higher, but anti-gay bias still exists. A new study suggests intense hostility toward homosexuals may be linked to a repressed same-sex attraction, combined with an authoritarian upbringing.

Though such factors are not the only cause of homophobia, the findings suggest those “who have a discrepancy within themselves about their expressed vs. unconscious sexual attraction find gay and lesbian people more threatening and are more likely to express prejudice and discrimination toward them,” says University of Rochester psychology professor Richard Ryan, co-author of the study, which is published in the April Journalof Personality and Social Psychology. Also an author is Netta Weinstein of the University of Essex, England.

The blocking of unconscious desires by adopting an opposite view is a well-known psychoanalytic concept, suggested by Freud and others. The new study uses “modern methods that allow us to more reliably peer into these less explicitly available parts of peoples’ psyches and see what’s arising,” Ryan says.

Among those methods: studies that measure discrepancies between what people say about their sexual orientation and how they react during split-second timed tasks. Study subjects — four groups of about 160 college students each, in the USA and Germany — also rated the attractiveness of people in same-sex or opposite-sex photos and answered questions about the type of parenting they experienced growing up, from authoritarian to democratic, as well as homophobia at home.

Researchers also measured homophobia — both overt, as expressed in questionnaires on social policy and beliefs, and unconscious, as revealed in word-completion tasks.

The findings suggest participants with accepting parents were more in touch with their innate sexual orientation. But, Ryan says, “if you come from a controlling home where your parents do have negative attitudes toward gays and lesbians, you’re even more likely to suppress same-sex attraction and more likely to have this discrepancy that leads to having homophobia and feeling threatened.”

Some in the field are skeptical.

Psychology professor Gregory Herek of the University of California-Davis has done extensive research on anti-gay bias and violence, and he says measuring unconscious same-sex attraction is “incredibly difficult.”

Psychiatrist T. Byram Karasu of Montefiore Medical Center in New York has similar concerns. The suggestion that parents play a role in homophobia fails to address the importance of “identifying with the authoritarian parent” and then taking that oppression “and projecting it outward. The study skips the self-oppression part,” he says.

Ryan says the study may help explain the personal dynamics behind some bullying and hate crimes directed at gays and sheds light on high-profile cases in which public figures who have expressed anti-gay views have been caught engaging in same-sex sexual acts.

“Some people who are threatened by gays and lesbians and are most vociferous in their opposition to them are suffering internally themselves,” he says.
Posted by HighJive at 10:20 AM