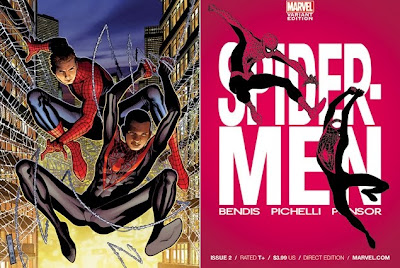 Marvel Comics brings together two special versions of Spider-Man, including one who is dead ringer for A-Rod

To celebrate the 50th anniversary of Spider-Man, Marvel Comics is bringing together two versions of the iconic character — one who is white and one who’s a dead ringer for A-Rod — in a mashup that pays homage to everyday New York.

“For the 50th anniversary of Spider-Man, what everyone was looking for was a Spider-Man story that mattered,” says series writer Brian Bendis. “Well, here you go.”

When Marvel introduced Miles Morales — a half-black, half-Latino teen — as the new Spider-Man in one of its comic lines last year, it made national headlines. Critics grumbled it was a character who would never make it alongside the original Spider-Man known to generations of fans since he was created by Stan Lee and Steve Ditko in 1962.

But Morales got a key stamp of approval from Lee. “Doing our bit to try to make our nation, and the world, color blind is definitely the right thing,” the comic book legend told The News.

Bendis agreed. “Someone had once said to me, ‘When I was a kid, I could only play Spider-Man, I couldn’t play Batman or Superman because my friends would say you’re not the same color, but I could play Spider-Man because when I fantasized about Spider-Man, he looked like me under the mask.’

“That was a big inspiration.”

Yet, despite the uncanny resemblance to the Yankees third baseman, Marvel Comics spokesman Arune Singh said “there is no A-Rod connection whatsoever.”
Posted by HighJive at 7:10 AM

Considering miles moreales was created less than a year ago this story about someone telling him when iwas a kid is bullshit who refers to themselves as a kid just nine months ago? Stop pushing this multicultualism down our throats!