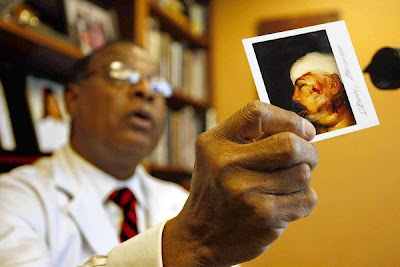 Working on a multiracial team to save a white truck driver who was beaten during the L.A. riots was a defining moment for Madison Richardson, a surgeon and black man who was taught that race shouldn’t matter.

Madison Richardson had no clue that Los Angeles was burning.

On April 29, 1992, the head and neck surgeon was touring the Griffith Park Equestrian Center with polo-playing friends from India. A colleague paged him. Could Richardson rush to Daniel Freeman Memorial Hospital in Inglewood to help care for a young truck driver who was near death after a beating? Oh, and, by the way, had Richardson been watching TV? No? Then find one and turn it on.

What Richardson saw reminded him instantly of the chaos he witnessed during the Watts riots in 1965 and the Washington, D.C., riots in 1968. Determined to see the situation for himself, he drove his Mercedes south along Crenshaw Boulevard to Florence Avenue before swinging west to Inglewood. As scattered fires burned, Richardson said he didn’t feel threatened. He was black, after all, and it was blacks who were rioting after the acquittal of four white police officers in the beating of Rodney King, a black man.

“In the run-up to the riots, there was always something in the air every day about the injustice,” he said. “I understood that mentality, the South-Central gestalt.”

His patient was Reginald Denny, whose bashing by four African American assailants was captured live by helicopter news crews. Denny quickly became a symbol of cataclysmic upheaval in Los Angeles, and observers throughout the world wondered whether he would survive.

If Denny were to succumb, Richardson suspected that it would be he — the lone African-American on the surgical team — who would get “scrutinized severely.” Indeed, it was he who was selected to be the team’s public face during nightly press briefings on Denny’s condition.

“There was no way in hell he was going to die on my watch,” Richardson recalled.

The doctor found it awkward to be considering race at all, given that he had spent much of his life insisting that race didn’t, or at least shouldn’t, matter.

A muscular 6-footer, Richardson, 68, was born in Prairie View, Texas. His father was a country doctor who was barred from practicing in local hospitals, so he commuted 60 miles to Huntsville, where he treated black patients by day and white patients at night. He also owned businesses and ranches, where young Madison learned to shoot, ride and “work like a demon.”

Richardson was reared amid an extensive network of white, black and mixed-race relatives. A Texas historical marker near Huntsville commemorates the forbidden love of his great-grandfather, William Rolfe Kelley, and great-grandmother, Dinah Rush. Kelley fought for the Confederacy—then, in defiance of state and federal laws, had 10 children with Rush, a former slave.

“Everybody around me was black and white,” Richardson said. “I didn’t know which part to dislike.”

Richardson attended segregated schools in Texas, but his mother insisted that he never use race as an excuse.

“I didn’t go on any freedom rides,” he said. “My mother reminded me I was going to be a doctor.”

Arriving at Daniel Freeman on the day of Denny’s beating, Richardson was part of a “rainbow coalition” of four doctors — two whites, a Korean and himself.

Their patient hovered near death, his skull fractured in 91 places and pushed into his brain. His left eye was so badly dislocated that it was in danger of falling into his sinus cavity. The cheek was shattered — “like you’d dropped an egg on the floor and the shell had broken,” Richardson said.

The team’s first action was to drain the blood that had pooled around Denny’s brain. On the second day, however, neurosurgeon Leslie Geiger called Richardson to say that Denny was in mortal danger. He looked like a “blow-up doll,” with his chest and torso distended, and he was struggling to breathe. Richardson told the hospital to prepare Denny for surgery.

The delicate task of reconstructing Denny’s facial bones fell to Toffel, with Richardson assisting. Both had been seasoned on military personnel wounded in Vietnam — Toffel in the Navy and Richardson at Walter Reed Army Medical Center.

Weeks later, Denny went home to recover, but he wasn’t in the clear. When a visiting nurse alerted Richardson that the patient’s legs were tender, Richardson surmised that the discomfort was caused by a blood clot that could dislodge, enter Denny’s lungs and kill him. Richardson sent him to Verdugo Hills Hospital in Glendale, and Denny’s life was saved again.

The decision was typical of Richardson’s meticulous approach to medicine.

When he was 4, his father died after being given a contaminated anesthetic solution during surgery. “That medical mistake framed my life for a long time,” Richardson said. “I have no tolerance for mistakes.”

Today, 20 years later, Richardson acknowledges that helping to save Denny remains one of the most powerful experiences of his life. He has hoarded mementos from 1992 — surgical notes, clippings, his Polaroid snaps of a bruised, bloody and swollen Denny, a Christmas card signed “Love, Reggie” — all of which he shared recently at his Beverly Hills office. Each triggers fresh memories, about which Richardson speaks with passion and an occasional catch in his voice. He remembers that the stakes were high, for Denny and for his doctors.

“Sometimes in our lives, events converge at a moment in time that seem to clarify and validate all that has preceded that moment,” he said. “All of the intense training, sleepless nights, broken marriages, hardships just seem worth it. I don’t want to consider what would have happened if I had not been prepared when the call came.”