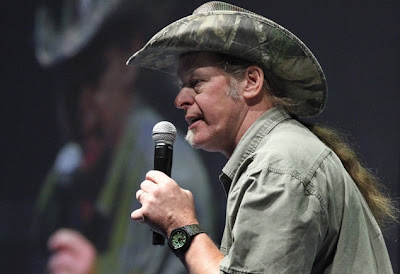 Ted Nugent not backing down from fiery Obama remarks: ‘I’m a black Jew at a Nazi-Klan rally’

Ted Nugent isn’t backing down from his fiery rhetoric about President Obama.

The Republican rocker and Mitt Romney backer stood by his controversial remarks, in which he called the commander in-chief “vile,” “evil” and “America-hating,” in addition to saying if Obama is reelected, “I will either be dead or in jail by this time next year.”

“I spoke at the NRA and I will stand by my speech,” Nugent told the Dana Loesch radio show on Tuesday, adding he was being unfairly criticized.

“I’m a black Jew at a Nazi-Klan rally,” the 63-year-old gun enthusiast griped. “And there are some power-abusing, corrupt monsters in our federal government that despise me because I have the audacity to speak the truth.”

The Secret Service also entered the picture following his rant at the National Rifle Convention in St. Louis over the weekend. A spokesman said the organization would conduct an “appropriate follow-up” given the nature of the violent rhetoric.

The presumptive Republican nominee’s spokeswoman Andrea Saul said in a statement that “Divisive language is offensive no matter what side of the political aisle it comes from,” adding “Mitt Romney believes everyone needs to be civil.”

“I am on the right track and she just encourages me to stand stronger,” he said.
Posted by HighJive at 7:09 AM