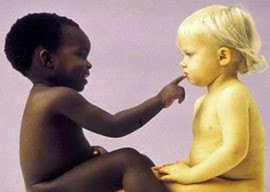 Recent events like the Trayvon Martin shooting have inspired Black parents nationwide to have The Talk with their children. This in turn prompted John Derbyshire to write The Talk: Nonblack Version at Taki’s Magazine. It’s hard to imagine what might have been rattling around Derbyshire’s skull while he typed the perspective, but he clearly is not among the 36% of Americans (FYI, Derbyshire is British-American) who would be most hurt over being labeled a racist. One must also question the sanity of the editors at Taki’s Magazine for their questionable judgment. The publication’s site boasts:

We at Taki’s Magazine take our politics like we take life—lightly. We believe political labels such as conservative and liberal are as outdated as flared trousers and nazis. Ideology is a false god, a secular religion that seeks vainly to create a paradise on Earth. Our only ideology is to be against the junk culture foisted upon us and mirages of a new world order. Think of us what you will, but read us. Our writers are never boring.

Ignorance masquerading as the intelligentsia is never impressive. Promoting hate for the sake of visitor hits is pathetic.
Posted by HighJive at 3:16 PM