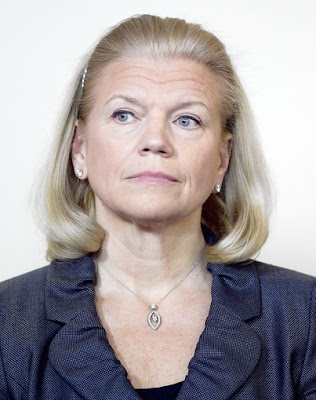 The Chicago Tribune offered an opinion on the Masters Tournament and Augusta National Golf Club’s male-only membership policy. Hey, somebody should get a comment from Tiger Woods.

Will ‘she’ don the green jacket?

IBM’s Ginni Rometty reduces the Masters to ‘no comment’

As the Masters Tournament eased into its 76th competition on Thursday — the course looked as impeccable as it ever has — a boorish little smudge crept up again.

Tournament host Augusta National Golf Club in Augusta, Ga., faces an unusually pesky public relations problem this year. While the club regularly incites, and even thrives on, criticism of its male-only membership policy, the issue is generating particular melodrama due to an important tournament partner.

IBM is one of the Masters’ most dedicated and generous sponsors. As a “thank-you” to the global technology and consulting firm, Augusta National traditionally gives the company CEO membership privileges and, of course, the bodacious green jacket.

Virginia “Ginni” Rometty, who boasts Chicago roots as a 1979 graduate of Northwestern University’s engineering school, oversees IBM as the company’s first female president and CEO. Her predecessor, Sam Palmisano, told The New York Times she got the job last fall “because she deserved it. … It’s got zero to do with progressive social policies.”

So, what about the Augusta membership?

Despite protests and severed sponsorships over the years, the clubhouse maintains its men-only protocol. Reporters grilled Augusta National Chairman Billy Payne this week during his annual news conference, asking whether the club would make an exception for Rometty. Payne offered “no comment” on JacketGate. Club matters are private, he said.

IBM, too. A spokesman told us the firm would not be discussing the membership issue.

Perhaps Rometty is too busy, and savvy, to respond to an anachronous, obnoxious clubhouse policy that doesn’t impact her life, her company or her employees. Yet IBM was one of several corporate sponsors to pull its television ads from the 1990 PGA Championship, which took place at an Alabama golf course that had white-only membership rules.

At what point do corporate CEOs stop looking the other way?

At the very least, Rometty should consider ending IBM’s deeply embedded relationship with the Masters and Augusta National if they don’t offer to her the same courtesy and respect extended to the CEOs of Exxon Mobil and AT&T, the tournament’s other corporate sponsors, both led by men. Closing ceremonies and the hallowed jacket-donning take place Sunday.

If Rometty is not included, or chooses not to participate, she can take comfort in the fact that she won’t have to wear one of professional sports’ homeliest garments: the Easter-egg-hue, brass-buttoned Masters jacket with a Girl Scout-reminiscent badge fastened to the left breast.

As tradition goes, the donning of the jacket is certainly more noble than the winner of the Indy 500 dribbling through a bottle of milk.

But in case you were wondering, yes, even the Indy 500 allows women to drive.

How radical.
Posted by HighJive at 7:21 AM