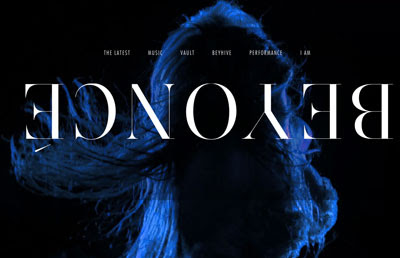 Who runs the world? Beyonce.

Last fall we reported that Bey—despite the megawatt smile, glamorous glittery gowns, and then-impending motherhood—was lacking in one regard: an acceptable digital presence.

In the superstar’s view, her website, focused largely on announcing singles and concert appearances, didn’t reflect the full scope of her interests and talents. So she and her management company, Parkwood Entertainment, turned to adland with a brief to fix her website.

The results of that initiative are now on display at beyonce.com. The revamped site was announced by the star over Twitter, which itself marked a major milestone. With 3.5 million followers, Beyonce had never tweeted until today, when she said: “Hey World, It’s B! I’m so excited to invite you to my new beyonce.com—we’ve been working hard, and it’s finally ready for you XO.”

The winner of the pitch (which several large New York shops turned down because of what was described to Ad Age as unreasonably tight turnaround times and a lack of specificity in the brief) was New York studio Designed Memory.

A letter on its website displays the shop’s motto: “We love solving problems.”

With Beyonce as a client, Designed Memory is making a big splash in the entertainment space. The boutique’s founder and creative director, Matthew Siskin, is something of a go-to among the stylish set. Back in 2008, The New York Times Magazine said he’s “like an ethonographer presenting artifacts from the exotic world of fashion.”

Designed Memory was the interactive studio behind sites for fashion brands such as Suno and jewelry designer Irene Neuwirth, and personal sites for Chris Benz, Genevieve Jones, and Albertus Swanepoel. Beyonce’s choice of Mr. Siskin for the revamp was probably driven in no small part by the fact she wants to promote her fashion brand, House of Dereon, via the site. A “spring look book,” with a collection of flowy dresses and jumpsuits, has already been uploaded.

Its homepage describes the site as “A newly personal view into her world, for you, by her.”

One executive familiar with her plans told us in the fall that Beyonce hated the previous site “because she doesn’t think that it looks like who she is as an artist, someone who likes fashion and art and photography and travel.” The star “has all sorts of interests, and wants to communicate that,” the person said, adding that Beyonce wanted the new site to be “daring and forward-thinking.”

The update includes handwritten ramblings and a bit of musing on Jean-Michel Basquiat, so we can probably expect to learn more about Beyonce’s artistic passions. There are also links to her newly unlocked Tumblr page, Facebook and Twitter, which indicates that she’s trying to get more aggressive on social media.

All in all, it’s a big move for brand Beyonce, and it’s possible that she got a little help from her friends in rethinking her virtual persona. By the looks of it, Bey is taking some cues from bud Gwenyth Paltrow, who has morphed into a media property via her weekly newsletter, Goop, and books that aim to convey she’s more than a hanger for red-carpet gowns but is into crafts and wood-burning pizza ovens.

And of course there’s Beyonce’s husband, Jay-Z, who has created a bit of a media property of his own with his Life & Times website. Already the two are cross-posting some content: photos of their new daughter, Blue Ivy.
Posted by HighJive at 8:38 PM