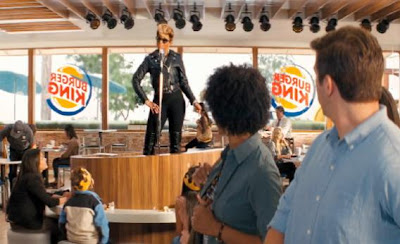 So why the uproar this time? Perhaps the answer has to do with the ad’s intended audience. Unlike the many fast-food commercials aimed specifically at black audiences, usually found on black-targeted networks like BET, the Blige ad features a mostly white supporting cast. It is meant to appeal to a “mainstream” (read: white) audience; some of the ad’s critics seem worried about the way it might make black people look to white people.

Not sure why Harris believes the ad is intended to reach a “mainstream” audience. In fact, she is probably dead wrong to think so. As previously noted, Burger King made a deliberate decision in 2010 to dump its minority agencies, claiming to take a more “cross-cultural” approach to advertising. In other words, the Mary J. Blige spot is not intended to primarily appeal to Whites, as Harris contends; rather, it’s for the mythical multicultural audience. And as the Salma Hayek companion spot has “cross-cultural” appeal, but really targets Latinos, the Blige spot is probably intended to have greater appeal for Blacks.

MultiCultClassics agrees with Harris that the commercial is not racist for the reasons many people think it is. However, it is arguably racist for reasons the general public does not realize. Specifically, a White agency was charged with producing advertising targeting blacks, delivered a culturally clueless effort, and allegedly saw fit to release the commercial in an unfinished state. There’s definitely some questionable behavior at play in this affair, but ordinary citizens remain oblivious to the behind-the-scenes details.
Posted by HighJive at 1:08 AM