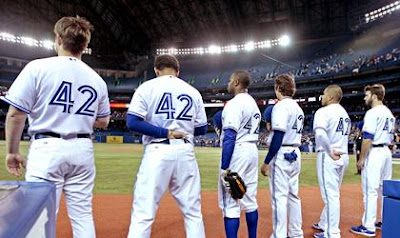 ST. LOUIS—Major League Baseball, celebrating Jackie Robinson Day Sunday, has the lowest percentage of African-American players since the earliest days of the sport’s integration, according to research conducted by USA TODAY Sports.

The African-American percentage in baseball this season has dropped to 8.05%, which is less than half the percentage of 17.25% in 1959 when the Boston Red Sox became the last team to integrate their roster. It’s down from 8.5% last season, and a dramatic decline from the peak of 1975, when 27% of all rosters were African-American. Even as late as 1995, the percentage was 19%.

“Baseball likes to say things are getting better,” says former 20-game winner and front-office executive Dave Stewart, who’s now an agent. “It’s not getting better. It’s only getting worse. We’ve been in a downward spiral for a long time, and the numbers just keep declining.”

“I don’t even know what to say,” said Byrd, the only African-American on the field Sunday at Busch Stadium in St. Louis during the 65th anniversary of Jackie Robinson breaking the color barrier.

“I remember when I came up with the Phillies in 2002, we had six [African-American] players. I thought that was the norm. Now, you look around, and don’t see anyone.

“Will it change? I don’t know. I’m hoping it’s a different story four or five years from now.”

Major League Baseball Commissioner Bud Selig, aware of the dwindling numbers, said the sport is diligently trying to reverse the trend with their urban academies and annual Civil Rights Game.

“We trying to get better. It won’t happen overnight,” Selig said. “And we’re very comfortable saying it will be better. We are doing great work with our baseball academies and working in the inner-cities. It’s getting better.”

While African-Americans are dwindling on the field, Selig said he’s pleased with the diversity of front offices. Still, Kenny Williams of the Chicago White Sox and Michael Hill of the Miami Marlins are the lone African-American general managers, and Dusty Baker of Cincinnati and Ron Washington of Texas are the only African-American managers.

“I remember Jackie saying 10 days before he passed [in 1972],” Selig said, “he wouldn’t be satisfied until we had a black manager and general manager. If he went through all of our front offices today in baseball, he’d be proud.”
Posted by HighJive at 5:17 PM