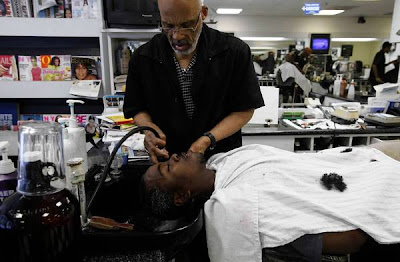 For black parents in Pasadena, shootings give fresh relevance to ‘The Talk’

The fatal shootings of Kendrec McDade in Pasadena and a black teen in Florida renew the painful generations-old discussion about the need to swallow one’s anger and pride when dealing with the police.

When Martin A. Gordon talks to his 19-year-old son about the history of race relations in America, he invokes the Black Panthers, Martin Luther King Jr.and the watershed moments of the civil rights era. It’s a story of hard-won rights that fills the ‘60s-era activist with pride.

Then the conversation turns urgently personal, survival its theme: On the wrong street, at the wrong time of day, he tells his son, pride might be his undoing. “I know my son can be a moment away from being killed if he acts the wrong way, if he’s arrogant,” Gordon said. “He started to learn about this as a child.”

Gordon was speaking in a Pasadena church, blocks from where an unarmed black college student, Kendrec McDade, was fatally shot March 24 by two white police officers pursuing two men who they mistakenly believed were armed robbers. Police say the incident began when the 19-year-old McDade and a friend stole a backpack from a car, and the owner lied to police, telling them the thieves were armed.

The incident, which remains under investigation, followed the controversial shooting death of an unarmed black teen in Florida by a neighborhood watch leader. For many black parents, the shootings have given fresh relevance to a painful generations-old conversation. “The Talk,” some call it.

“Certain things are a reality for him — he needed to understand that early on,” Jim Collins, a longtime Pasadena resident, recalled of his conversation with his son. “The Talk is because they have to know what to do and not do.”

Parents say some version of the conversation, ubiquitous in African American life, is necessary regardless of how high they climb on the socioeconomic ladder. It is about learning to say “Yes, sir” and “No, sir” when a policeman pulls you over, no matter how unjustified the stop seems. It is about keeping your hands on the steering wheel and giving officers no cause for panic. It is about swallowing your anger and pride and coming home alive.

Gordon, an activist with the Pasadena Community Coalition, said he worries when his son stays out late. “If I wake up and he’s not there, I go, ‘Oh, boy,’” Gordon said.

He said he speaks at seminars, instructing black youths about how to handle themselves around police. He wants them to know their rights, but also to be respectful.

“Just because you asserted your rights doesn’t mean you won’t get your butt kicked,” Gordon said. “You can be dead and no one’s there to speak for your rights. That’s what scares me most.”

Read the full story here.
Posted by HighJive at 8:25 AM