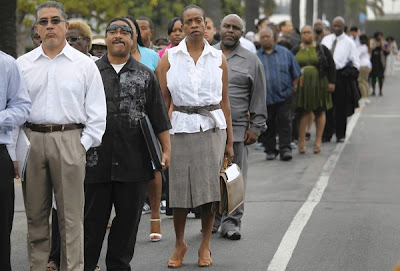 Blacks in South L.A. have a bleaker jobs picture than in 1992

Median income in South Los Angeles is lower now than during the 1992 riots, and the unemployment rate has reached even more dire levels.

Two decades after the L.A. riots brought pledges of help to rebuild South Los Angeles, the area is worse off in many ways than it was in 1992.

Median income, when adjusted for inflation, is lower. Many middle-class blacks have fled in search of safer neighborhoods and better schools.

Last summer, thousands of South Los Angeles residents showed up to a job fair that brought out almost 200 employers at Crenshaw Christian Center on Vermont Avenue. The event, organized by Rep. Maxine Waters (D-Los Angeles), was seen by some as grandstanding.

There have been training and other job programs — both privately and government-funded — in the roughly 51-square-mile area in the last two decades. A post-riots report said the area needed an investment of about $6 billion and the creation of 75,000 to 94,000 jobs.

The federal and state governments spent as much as $768 million, according to a 1994 estimate, but the main aim of Rebuild L.A. — the group leading the revitalization effort — was to steer the private sector to create jobs in the area.

Toyota, Pioneer Electronics and IBM were among the corporations that held seminars and classes.

The training center started by Toyota, in conjunction with the Los Angeles Urban League, was one of the few that succeeded in the decade after the riots. It’s now closed, but it produced about 1,000 graduates trained in entry-level automotive skills.

Most of the private-sector programs, however, had little effect.

“There are many things the private sector does well, but investment in depressed areas is not often one of them,” said Chris Tilly, director of the UCLA Institute for Research on Labor and Employment. “The nature of private-sector investors is to look where the payoff is. If you’ve got large swaths of the city where there are bad schools, poor people and crime, that’s not where private investment will go.”

During the 1970s and ‘80s, many South Los Angeles residents were able to make a middle-class living working in manufacturing and aerospace. But those jobs disappeared when those employers closed up shop, resulting in mass layoffs.

Labor activists and residents said that when jobs now become available in the area, they often don’t pay living wages.

The situation “is worse today,” said the Rev. Richard Byrd of Krst Unity Center of Afrakan Spiritual Science, near Western and Florence avenues. “From the standpoint of where we ought to be today, we’ve failed to make any progress.”

At the time of the riots, South L.A. was almost 50% African American. Many with the means to leave have since moved to areas such as the Inland Empire and Lancaster and Palmdale in the Antelope Valley.

Now South Los Angeles is 30% African American, according to U.S. Census data, and black-owned businesses that once had a stronghold in the area have declined steadily.

Meanwhile, Latinos attracted by affordable housing have settled in the area and now make up about 64% of the population. Latino-owned businesses have cropped up along the main corridors. Mexican grocery stores are thriving. Immigrants flock to money-wiring outlets to send funds to relatives in Mexico and Central America. Spanish has become the language most commonly heard in the streets of South Los Angeles.

The demographic shift has made it even more difficult for African Americans to find good jobs, said Vernon M. Briggs Jr., a Cornell University labor economist who has studied the effect of immigration on blacks for more than three decades.

Latino immigrants, he said, tend to form tight-knit job networks. “What employers learn to do, if they find workers they’re content with, they ask those workers to bring any relatives or friends and become more dependent on them.”

“We have to have that same mentality that we have to look out for each other,” said Richardson, who is African American.

Other economists say that residents of South L.A. are also stigmatized simply because they live in the area, which still suffers from the perception that residents are not highly educated, even though progress in that area has been made.

It’s unlikely that the area will see much improvement any time soon, UCLA’s Tilly said.

What’s lacking, he said, is “muscular public investment” in education. And, he said, the economic recovery needs to get stronger.

“Those folks are most likely to advance when there’s strong economic growth and a strong public-sector investment,” he said. “I don’t want to say there’s no hope, but I will say that aspect of the national political environment makes me pessimistic at the moment.”