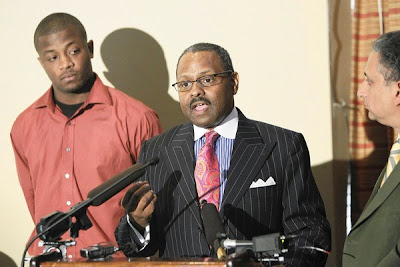 A class-action suit filed by two black men claims “The Bachelor” turned them away because they were not white. I think they should feel relieved. Having the right to embarrass yourself on national television doesn’t mean you actually should do it.

Nevertheless, there is no shortage of people seeking fame by way of the so-called “reality” TV shows such as this dating competition, which has been on ABC since 2002, and its sister show, “The Bachelorette.” Two of them are Nathaniel Claybrooks and Christopher Johnson of Nashville. They say in a suit filed in federal court there that they were not given the same consideration as white candidates when they tried out to be contestants during a regional casting call.

They’re not saying they definitely should have been selected, said their Washington-based lawyer, Cyrus Mehri, only that they be given “the same level of consideration as white applicants.”

The lawsuit, which names ABC and Mike Fleiss, executive producer of the two programs, claims the dating shows have never featured a person of color in the central role of deciding who, among the season’s lineup of dates, is the winning choice as a potential mate.

Does their suit have a chance? Civil rights lawyers say the plaintiffs could depose producers of both shows and probe everything from contestant applications to internal production memos during the discovery process. That could prove hazardous for any sort of show-business enterprise, since industry people can be brutally candid about the talent they seek. Think of “American Idol” judge Simon Cowell at his worst.

In one recent example, Acura apologized after a leaked casting-call sheet for its Super Bowl commercial asked for an African-American car dealer to be “nice looking, friendly, not too dark.” A spokesman explained that “the skin tone restriction was to avoid problems with lighting and special effects.” Yet, one wonders, would they turn down stars like, for example, Taye Diggs or Sidney Poitier or Lou Gossett Jr., without even giving them a try-out?

The dating shows bring up a deeper social question about our times: America is past being ready for a black president, but is it ready for a black “Bachelor”? The biggest challenge in the show’s casting process is to find bachelors who viewers in America’s vast mainstream national audience will care enough about to stay tuned-in for the duration of each season.

It is reasonable to assume that race, like any other visible characteristic, will figure into that decision even though it probably is not legal and certainly not politically correct in today’s racial etiquette to say so or mention it in writing.

Regardless of how the lawsuit turns out, I suspect the marketplace may well decide this issue. If the show’s ratings fall into a steep enough decline, for example, its producers may well want to cast a nonwhite bachelor to give the program an attractive burst of social tension. That’s show biz.

And, my snobbish tastes aside, numerous TV viewers await a nonwhite “Bachelor” or “Bachelorette” with the nervous anticipation that earlier generations felt about Jackie Robinson crossing baseball’s color line in the 1940s. Lamar Hurd, an African-American Portland, Ore.-based sportscaster, has reportedly been in talks with the show to be the first black “Bachelor” after he was the subject of a social media campaign. As the old TV saying goes, stay tuned.

Many of us had hoped that America had gotten past such hang-ups when Captain Kirk, played by William Shatner, kissed Lt. Uhuru, played by Nichelle Nichols, on the original “Star Trek” series in 1968, which is often cited as the first interracial kiss on a scripted television series. Yet the people who create network television are still nervous about what the heartland of America will accept.

Meanwhile, in the real world interracial relations are rapidly becoming old news, even in the heartland. Paul Taylor, director of the Pew Hispanic Center, recently revealed a poll that found 15 percent of marriages in the United States are interracial, compared with only about 0.1 percent in 1961. “The human heart is the last frontier,” Taylor said.

Or maybe, as they used to say on “Star Trek,” it will be “the final frontier.”