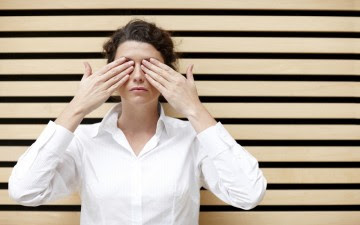 Between the racist comments, the constant use of the race denial card (this country’s most frequently used “race card”) and the absurd claims of White victimhood, you have really grated my last nerve.

Sure, we got teary during The Blind Side and Antoine Fisher; we maybe even gave money to KONY2012 and after Hurricane Katrina; we maybe even donned a hoodie to protest the murder of Trayvon Martin. I don’t even doubt there are individuals out there who are genuinely concerned about racism and injustice; I don’t doubt that there are many Whites that marched with Dr. King and whose “best friends” might be Black. None of this matters if African Americans continue to die at the hands of guns held by security guards and police officers all without justice

I want you to close your eyes for a second, and imagine that your son or daughter, sister or brother, granddaughter or grandson, ventured to the corner store for some Skittles and tea but never returned? Can you imagine if Peter or Jan were gunned down right around the corner from your house and the police didn’t notify you right away? Can you imagine if little Sydney or Bobby sat in the morgue for days as you searched to find out what happened them? Can you even imagine the police letting the perpetrator go or the news media remaining silent? Can you even fathom learning about background and drug tests on your child? Can you imagine the news media demonizing your child, blaming your child for his own death?

Can you imagine the outcry if seven White youths had been gunned down by police and security guards in a matter of months? Can you imagine the extensive political interest, the media stories that would saturate the airwaves? Can you imagine Fox News or any number of newspapers reporting about a school suspension for one of the victims or doctoring pictures in an attempt to make these victims less sympathetic? Can you imagine a person holding up a sign calling these victims “thugs” and “hoodlums.” Just think about the media frenzy, the concern from politicians, and the national horror every time a school shooting happens in Suburbia or every time a White woman goes missing…can you imagine if women routinely went missing from your community and the news and police department simply couldn’t be bothered?

Yet, from Florida to Los Angeles, from Atlanta to Wisconsin, from Chicago to Ohio, Black families are burying the innocent and the future. Doesn’t that make you sad; doesn’t that make your angry? Our silence is telling. We can barely say their names much less acknowledge the epidemic in our midst: Stephon Watts. Trayvon Martin. Ramarley Graham. Wendell Allen. Dante Price. Bo Morrison. Rekia Boyd. Kendrec McDade.

All have lost their lives; and we don’t even say their names. All have died under similarly disturbing circumstances. All should have prompted national outrage and action; or at the least for us to say their names.

I don’t care if you cried during The Help and if the ‘feel good’ movie of the year featuring chicken-frying maids and affluent White women made you feel all post-racial tingly on the inside. Did you cry at the report of yet another lost Black life? If so, what have those tears done—have they led you to join a rally, to demand justice? I don’t care if you voted for President Obama; have you demanded dramatic changes to our criminal (in)justice system? It is time for us to check ourselves, to listen and demand a better America starting with ourselves. It is time to stop denying racism and defending White privilege, distracting and deflecting with “what ifs” and excuses. It is time to demand justice for the Trayvons and the Rekias, not because it could have been one of our sons and daughters—it couldn’t—but because it is simply the right thing to do.

A member of White America

David J. Leonard is Associate Professor in the Department of Critical Culture, Gender and Race Studies at Washington State University, Pullman. He is author of After Artest: Race and the War on Hoop (SUNY Press, spring 2012).
Posted by HighJive at 9:49 AM

how did I miss this? thanks for posting.