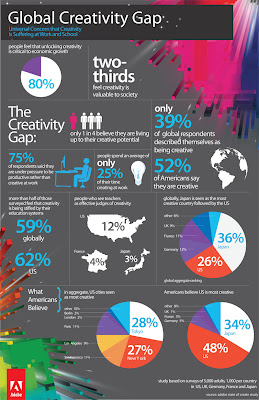 Advertising Age reported on a global study indicating 75 percent of people believe they are not living up to their creative potential. Last year, Draftfcb Chairman Howard Draft admitted only 20 percent of the work his agency generated could be deemed great creative—so his shitty shop is actually doing worse than the global norm. And Draft was arguably generous with his estimate.

Global Study: 75% of People Think They’re Not Living Up to Creative Potential

That was just one of the startling findings in a global-benchmark study, conducted by Adobe and just released, about how creativity is perceived and valued in different regions. The research was fielded in March and April, with 5,000 adults in the U.S., U.K., Germany, France and Japan interviewed.

“The purpose of the study was to get a gut feel for how people are feeling about creativity today,” Ann Lewnes, senior VP-marketing at Adobe, told Ad Age. The release of the data coincides with a campaign that Adobe is launching to market a new service, the Creative Cloud, a suite of touch applications available on Android and iPad devices.

Across the study data, people in the U.S. said they have the highest regard for the value of creativity but also expressed the most concern about the way creativity is valued.

In the U.S., 52% of respondents described themselves as creative, the highest of all the regions. It was significantly higher than France, which was 36%, and much higher than Japan’s 19%.

Six in 10 people felt that being creative is valuable to their country’s economy, while in the U.S. that number was seven in 10. France was the country with the lowest number of people thinking creativity is very important to its economy—13%.

Nearly two-thirds of all surveyed believe that being creative is valuable to society. In all regions, more than half said they believe that creative impulses increase during times of economic uncertainty or downturns.

More than half of all the respondents said that the educational system stifles creativity.

“The most disturbing data was on the state of education. … Teachers were perceived as the least-important judges for creativity, which is troubling for the future and for youth,” said Ms. Lewnes, who pointed out that with severe budget problems, arts programs are often one of the first things cut.

Respondents overall reported that they spent less time creating at work than they did outside of work.

“We see that as being hampered by lack of time and the environment they are in not being conducive to creativity,” said Matt Norquist, exec VP at StrategyOne, which conducted the research. “We clearly haven’t quantified the value of creativity in the workplace. … Productivity and creativity shouldn’t be [contradictory]. If we can get to the point where the two are brought together, that value can be taken to the bank.”

Indeed, respondents reported increasing pressure to be productive rather than creative at work. In the U.S. and U.K., 80% of people felt that way, while the number rose as high as 85% in France.

“That speaks to discouragement in the workplace for creativity,” said Ms. Lewnes.

And despite the proliferation of open-space environments in ad agencies and design firms, it’s possible that such office settings may be hampering rather than fostering creativity. Seven in 10 of the respondents reported that they prefer to work by themselves when being creative.

Interestingly, social media plays at most a minor role in motivating people to create; less than 15% of respondents said it plays a large role.